I was very fortunate to have been contacted by Hill Holliday – New York to take part in an amazing multimedia fan experience for Verizon. It is an entirely new way to explore sports and technology. Little did I know it would quickly become one of the most challenging and rewarding pieces I’ve ever worked on. The good folks at Lava Studio have put together an incredible video explaining the Verizon Interactive Wall, so take a look now if you have not had the chance to experience it in person!

My piece of the puzzle was to create the mural of characters that would be used to cover the 30′ wall. I also painted the “life-sized” characters in the foreground. As you can see from watching the video, the whole project was very “Minority Report-esque”. Three HD monitors slide over the entire wall and allow a fan to trigger my static black and white illustration transforming it into a high definition video of the character. Then a touch screen interactive graphic covers the screen allowing viewers to get stats, learn about Verizon products, etc.! Very cool concept for a sci-fi enthusiast such as myself.

All of the assets had to be painted at actual size for reproduction on the wall. I worked in shades of gray to allow either a green or blue light to be cast on the character, depending upon whether there is a Jets or Giants game that day. Below you can see some of the paintings I created to give you an idea of the detail needed. The creative directors wanted the style to be realistic enough to blend with the video yet remain painterly. Corel Painter was essential in accomplishing this level of realism.

The agency Branger_Briz worked with Lava to develop the interactive touch based i-Wall system. This display won two interactive awards for 2011, the Golden Addy and the Charlie Award. I am very happy to have been a part of its realization and proud to say that I used Corel Painter to bring the illustrations to life. Now I just have to get out to Jersey to see it for myself! I would love to hear what you think of it. 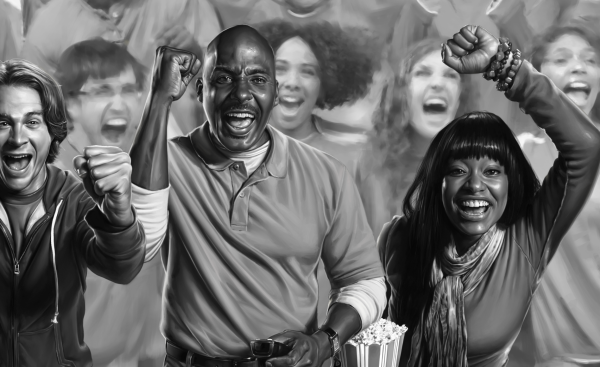 Mike Thompson began his career painting hip-hop artists for various clothing companies. His work has been featured in several popular print, web and television advertising campaigns over the years. Best known for his celebrity portraits, he has painted artists such as Jay Z, Kid Rock and the Roots. In 2010 Mike painted a 10’ x 30’ interactive wall display for Verizon at the Meadowlands Stadium. His work is currently on display at the Grammy museum, in Los Angeles. Mike’s client list includes companies such as, Nike, Warner Bros, Hasbro and Dimension Films. See Mike’s work at: www.miketartworks.com
View all posts by Mike Thompson →
This entry was posted in Digital art and tagged Corel, Mike Thompson, Painter. Bookmark the permalink.

This site uses Akismet to reduce spam. Learn how your comment data is processed.